The goal of a clinical trial is to test whether a potential treatment slows the rate of disease progression. Figure 1 illustrates the hypothetical range of future progression in an outcome measure among all potential volunteers (higher values represent greater disease progression). We emphasize that this progression is happening in the future and is not yet observed at the time of trial enrollment. 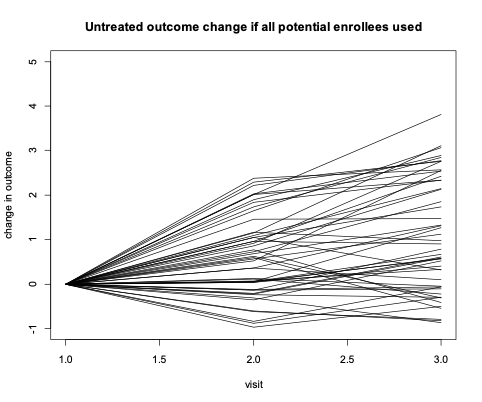 For many potential enrollees, there would be little or no clearly measurable progression over the course of the trial, regardless of whether or not they receive the trial’s active treatment. Over the two visits in this example, there is fluctuation in each enrollee’s rate of change from visit to visit. This fluctuation is largely due to the “noise” within the signal- to-noise ratio discussed in ’Using Observational Data to Inform Clinical Trial Design’. This noise is often due to a combination of inconsistent measurement technique (e.g., change in clinician/rater) and random true day-to-day variation in the outcome. If, in the absence of treatment, there is little consistent progression (i.e. signal) relative to the noise in the measurement, then it will be very difficult or impossible to measure whether the treatment has an impact. It’s important to note that we generally assume that a successful treatment will slow or even stop disease progression but will not lead to improvement relative to disease severity at the time of study entry.

In this example, nearly all the information about whether a treatment has an effect is due to outcome differences between randomized treatment versus control among those highlighted in red in Figure 2. The clinical trial could be done much more efficiently, with fewer participants, if we could initially screen to enroll only those with red progression. 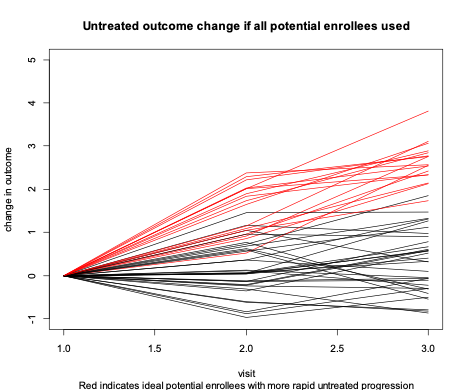 We cannot, of course, know the potential enrollees future untreated progression with certainty. However, we may be able to predict which enrollees are more likely to progress based on their current characteristics (risk factors). Statistical modelling of longitudinal data from observational studies such as Enroll-HD enables us to identify such characteristics and estimate the magnitude of their influence on future progression.

Clinical trials could be made more efficient if threshold values of risk characteristics are used as enrollment criteria to screen for those at high risk of measurable progression (Figure 3). This is called enrollment enrichment. 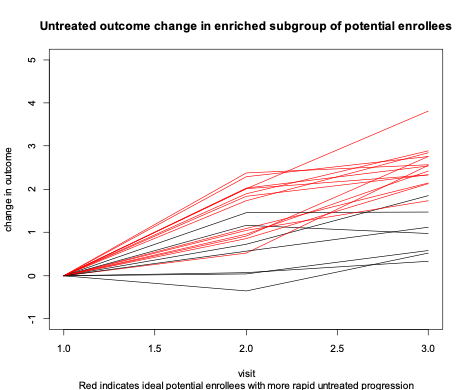 Because we cannot predict the future perfectly, no enrichment strategy will be completely effective in screening out those with little future progression (there are still a few black progression lines in Figure 3). However, the average amount of informative data contributed per enrollee will be much higher in the enriched sample.

We must emphasize that the idea of enrichment is critically dependent upon the assumption that the disease severity among the enriched sample is at an appropriate level to be targeted by the treatment mechanism being tested in the trial. This assumption must be assessed carefully. Rapid untreated progression is of no value if it occurs among those who are too ill to benefit from the treatment. With this in mind, we note that the techniques described here can be used to select the most appropriate enrollment group for a proposed treatment, even if the most appropriate group is not the group with the fastest progression.